The cover of my second children’s mystery is here! I’m so excited to reveal the cover of Andi Under Pressure. This is the sequel to Andi Unexpected, which was a 2013 Agatha Award nominee for Best Children’s/YA Novel. In book two, Andi and Colin are back solving the mysteries of Killdeer, Ohio’s checkered past. There might be a slight explosion in this one! Very special thanks to my friend chemistry professor, Dr. Sarah Preston, who helped me with the science behind the story.

Twelve-year-old Andora ‘Andi’ Boggs and her new best friend Colin Carter couldn’t be more excited to attend the prestigious science camp at the local university in Killdeer, Ohio. Unfortunately, Discovery Camp’s curriculum appears to include much more than just chemistry and biology. From day one, the university is plagued by a series of pranks—missing markers, loose crickets, and stolen scales. Campus security blames the mysterious janitor Polk, but even though Andi agrees he’s acting suspicious, she can’t believe the gentle old man would do anything illegal. Then one prank goes too far and their chemistry professor is injured by an explosion in the lab, upping the stakes of the investigation. Andi and Colin must unravel the secrets behind the chemistry department and Polk’s dark past before danger closes the camp for good.

Andi Under Pressure releases on October 7, 2014 and is available for preorder now.

AND HERE’S THE COVER!

Someone is up to no good in the chemistry lab! 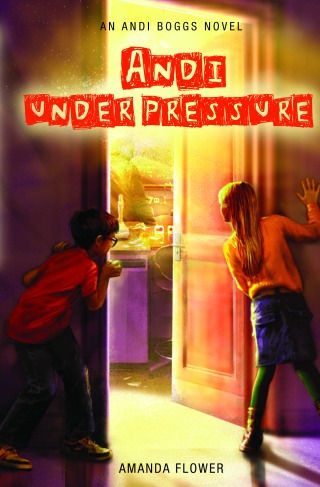 Praise for the series

“In the upstanding tradition of Nancy Drew and Harriet the Spy, Andi is spunky and unafraid to take risks” – Booklist