One of the easiest ways to pick out an Amish man is his facial hair. Married Amish men have distinctive uncut beards without mustaches.

The length of the beard is determine 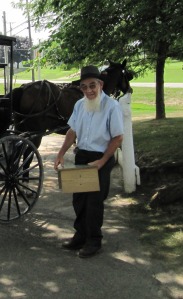 d by each Amish man’s district. Some districts require a specific beard length, and some are more lenient. However none allow mustaches.

The Amish form of Anabaptism began in the late seventeenth century in Switzerland. Jacob Ammann was an elder in the Alsatian branch of the Swiss Anabaptists. Ammann was a proponent of shunning of excommunicated members. This severe form of discipline led to a schism in the Swiss Anabaptist church and to the creation of the Amish doctrine. The name “Amish” was created from Ammann’s name.

Another rule for which Ammann strongly advocated was beards for married men sans mustaches. In the sixteenth and seventeenth centuries in Europe, soldiers and military officers typically wore mustaches as it was the fashion of the time. Consequently, this facial hair was forbidden because it was a way to

display the Amish separateness from the world and signify the Amish practice of pacifism.

In many districts, Amish men begin growing their beards right after their weddings. In this respect the beard is also a way of telling the world the man is married as the Amish do not wear wedding rings.

One thought on “Amish Spotlight: Beards”