Today is release day for my second India Hayes mystery, Murder in a Basket!

If you can’t find the mystery at your favorite bookstore, please ask the shopkeeper to order it. Remember, you can always suggest Murder in a Basket to your local library to purchase so that you and all of your friends can read it!

In Murder in a Basket, college librarian India Hayes thought the worst thing about the Stripling Founders’ Festival was her pink gingham pioneer dress until she discovered the body of a free-spirited basket weaver on the festival grounds. The basket weaver leaves behind an angry blacksmith husband, a confused adopted son, greedy siblings, a dysfunctional artists’ co-op, and a labradoodle with a two-million-dollar trust in his name. Despite the wrath of her college’s provost and protests by handsome police detective Rick Mains, India finds herself playing sleuth as well as foster-owner to the two-million-dollar dog. With her own eccentric family commenting from the sidelines and her Irish-centric landlady as volunteer sidekick, India must discover the truth before she has a permanent canine houseguest or ends up the next victim in the basket weaver’s murder.

What the reviewer are saying…

“. . . this humorous cozy moves at a steady clip, throwing in a monkey wrench or two to put readers off-track. Agatha Award nominee Flower has the chops to make this series last. ”- Library Journal

“In Flower’s delightful, clean-as-a-whistle second India Hayes mystery, India, the librarian at Ohio’s Martin College, intends to retrieve the items she left in her face-painting booth at the founders’ festival, but discovers more than she bargained for . . . The satisfying conclusion will leave cozy fans eager for India’s next adventure.” –Publishers Weekly 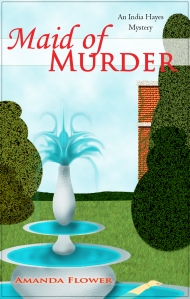 8 thoughts on “Happy Murder in a Basket Release Day!”