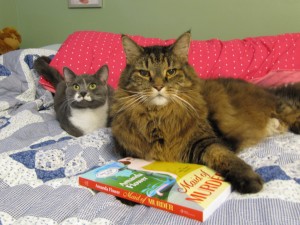 Are you tired of waiting for Maid of Murder to be released?  Does June 16, 2010 seem too far away?  Do you want to read it now?

Here’s your chance to be one of the first to read my debut mystery, featuring librarian-sleuth India Hayes.  I have one Advance Reader Copy (ARC) available to give away, and you can win it!

How the contest works:

Anyone who makes a comment on any one of my blog posts (including this one) between Friday, March 19, 2010 and Friday, April 2, 2010 will be automatically enrolled into a random drawing to win a signed Maid of Murder ARC.  Entries names will be placed into individual plastic Easter eggs for the drawing.  My nearly one-year-old niece will select the winning egg/contestant on Easter Sunday, April 4, 2010.  The winner will be announced here on my blog on Sunday, April 4, 2010 at 9pm EDT.  After the announcement, the winner will be asked to send his or her snail mail address to me via email.  The winner will have five days to claim his or her prize or a new winner will be chosen.

1)      Entries are limited to U.S. and Canadian mailing addresses.

2)      Comments deemed profane or offensive will not be included in the contest.  I reserve the right to make that determination. (No curse words, please!)

From the book jacket of Maid of Murder:

India Hayes is a lot of things . . . starving artist who pays the rent as a college librarian, daughter of liberal activists, sister of an emotional mathematician, tenant of a landlady who has kissed the Blarney Stone one too many times, and a bridesmaid six times over. But she’s about to step into the most challenging role of her life: amateur sleuth.

Childhood friend and now knockout beauty, Olivia Blocken is back in town to wed her bodybuilder fiancé with India a reluctant attendant . . . not just because the bridesmaid’s dress is a hideous mess, but because she’s betraying her brother. Mark still carries a torch for the bride who once broke his heart and sent his life into a tailspin.

When Olivia turns up dead in the Martin College fountain and the evidence points to Mark, India must unmask the real culprit while juggling a furious and grieving Mother of the Bride, an annoyingly beautiful Maid of Honor, a set of hippie-generation parents, the police detective who once dated her sister and is showing a marked liking for her, and a provost itching to fire someone, anyone—maybe even a smart-mouthed librarian.

India’s investigation leads her on a journey through childhood memories that she’d much rather have left in the schoolyard, but to avoid becoming the next victim, it is a path she must follow.

Maid of Murder is a fast-paced, laugh-out-loud mystery set in an amusing world of academia. Readers will fall in love with India Hayes’s fierce loyalty and wit.